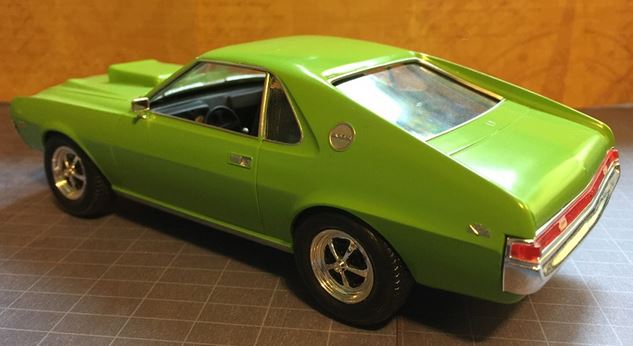 I really like AMC muscle and I’m kinda bummed about the lack of good car kits out there. This is one of the only AMX/Javelin kits that you can buy and it is not only a lousy kit, but VERY expensive.

There are a few race models made by Revell and a 1/20th kit that is quite easy to find, but there are just too few of these Testors kits out there. Even the un-muscle, uninteresting Marlin kits have become pricey and hard to find. The Jo-Han kit (left) is a facsimile to the above, but I’ve not built it to say better/worse. It is expensive if you find one too, however.

CAR BACKGROUND :: AMC was in its prime this year and offered the AMX, Javelin, Rebel Machine, and the SC Rambler. I will be reviewing the SC Rambler later, but I like the AMX best of the lot. Any of the above had a lot of oomph. The high-performance versions carried the 390ci, V8 that easily had more than 300hp. They were no match for some of the the other muscle in ’69, but still could manage 14 second E.T.s and would easily get to 100mph.

BUILD NOTES : I really dislike this kit and from stem to stern. The wheels that come with it are awful and the special “metal” ones are heavy and look odd next to any other model cars. It comes with a otherworldly hood scoop and typically has a lot of flash to remove. Add to that the need for a dozen pieces from other kits, and you are stuck with a AMC jigsaw puzzle. The “pro stock” setup is rather good if that is your kick, but with so few AMC car kits out there, you should persevere and make it stock.

The 390 that comes with this kit isn’t bad, but it is only setup for “street”. I therefore had to dip.. rather dive into the parts bin to help her out. The air cleaner is out of another kit, but I used one of the included carbs. I also had to swipe a stock intake from a ford kit as I did not want the cross-ram included. Because of the above, I also had to fashion a radiator hose as the one included was race-orientated. I decided on a green wire motif this time and had to add a proper brake boost and battery (as the kit didn’t include one). It all turned out ok, but do NOT expect this stock look from the package. I also made the 390 air cleaner decal to go with it as there are none with the kit – and frankly, none to buy either.

For paint I had to steel from the Mopar collection and use Sublime Green. They made Big Bad Blue for model cars, but not green. I sure wasn’t going to buy the real thing either.. I spend too much as it is and I was not buying a $20 spray bomb to do this car. Anyways, the color is very close and looks great on the AMC. I also stole proper magnum wheels from another kit and the tires to match. Besides that, I had to produce a rear view mirror, and a side mirror as well.

The interior is lackluster and has very little detail. There is no back seat (which the real thing didn’t have) and no center console either. Rather sparse for a mild muscle car. I used a different shifter and added a stalk to the column, but otherwise the interior was ok.

The chassis is going to give fits more than any other problem with the car. The kit is set up for big headers and deleted exhaust. NOT on my menu. I used most of the exhaust off of a 67 Charger, including the straight “ends” with nice tips. There isn’t a whole lot of other detail to see here. Both axles are molded and devoid of add-ons. No shocks, springs, joints etc. It came out ok, but is not the selling point of this kit.

If anyone knows of good AMC kits I would be VERY thankful. I have no need of Gremlins, Matadors (why the he## did someone think a Matador was needed???), or Pacers, so anything with a big V8, AND looks, will work for me. This one is NOT for the faint of heart and requires a lot of skill to make stock. It is also missing so much that unless you are a veteran builder with a parts bin, you’ll be out of luck in every area of the car. These kits are rare as heck and cost upward of $80 when you find em. It’s a necessity if you want a AMX… but an expensive one.