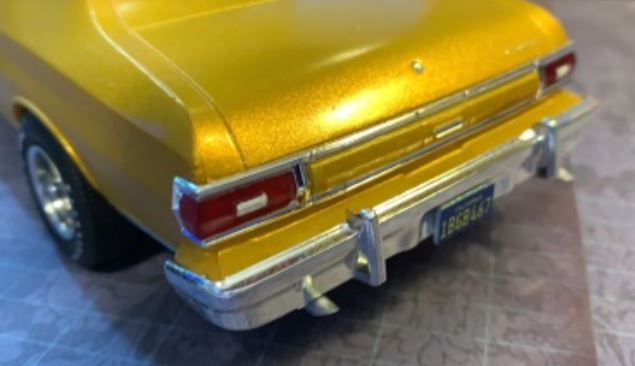 I was into a LOT of 80’s shows when I was little and most of them centered around cars. Hardcastle & McCormick, Dukes of Hazzard, Knight Rider, Magnum P.I., Automan (I’m sure you’ll have to google this one), and, of course, Starsky & Hutch. Now, the last one was probably my least favorite, but it wasn’t because of the car. This kit is tailored around the Starsky & Hutch police car used in the TV series, but it is also the swan song for an iconic muscle car.

This is the only other kit for this year Torino and it is molded in a vomit-inducing red-orange. The secondary pieces are all in black and the chrome is – chrome, but has the red “tint” that chromed color pieces typically do. Both kits have the decals and police light for the S&H version, so you are just gaining the “box” as a collector item vs. the other kit.

CAR BACKGROUND :: By the mid 1970s, the “muscle car” era was completely dead. There were a LOT of wannabees that tried to carry the torch – Volare Roadrunner, Trans Am, Mustang II King Cobra,… and so on, but none were as fast as the earlier cars were. By the start of the 80’s, cars were more about gas mileage and looks than speed. The ’76 Torino did fit the mid-seventies cliche’ perfectly though. With a 351ci engine pushing out a wheezing 152hp, the ¼mile would take almost 17 seconds. The fast and nimble Torino was no more.

BUILD NOTES : So, back to the model. It is a really decent build. Most of the parts fit reasonably well and there isn’t a lot of flash to remove. You have to watch for the two pieces just behind the front bumper as they should be glued on before painting. There aren’t a lot of “extras” with this one, but it isn’t a 2-in-1 or street rod either.

Well it may be one of the least powerful engines you’ll see on my site, but it is rather attractive. The engine bay is detailed ok, but the engine looks really smart. I added a chrome air cleaner and made my own 351 decal. I also added a caution fan decal, but otherwise the rest looks fine. If I were looking for this to be a drag car, however, there is enough room to stuff in a 428CJ or the like. Just be aware that all “street” parts will have to be from your own parts bin.

Since I purchased the non S&H version, I was able to go with a Inca Gold motif (close to the stock Ford color). I like this color a lot on the Torino and the brown interior matched well. I used white letter tires and rims from a ’71 Mustang as the regular hubs looked terrible (and old-man-ish). Bumpers fit easily and I like the way the under-carriage fits into the body – rock solid.

I decided to go with a brown leather look and it looks good with the gold. The automatic stalk was removed and I replaced it with a 4-speed stick shift on the floor. Won’t make the car blazing fast but burn-outs are a bunch easier. The rest of the interior is very detailed and has everything – including a directional stalk and rear-view.

I wish most model cars looked like this one underneath. Great detail, easy to work exhaust, and easy-as-pie fit to the body makes for an A+ all the way around. I replaced the stock “tips” for some larger, more prominent ones, but otherwise, you’ll need nothing for this one.

Beyond the really bad muscle behind this muscle car, the model is really, really good. The decals are there for the Starsky version, but for the regular car, there is enough to be happy with. This is a top-notch collectable too since it is the first run for this one. It also means that it is very affordable. Hobby Lobby has them for $18 after 40% coupon. If you want a really good, inexpensive builder… this one is IT.