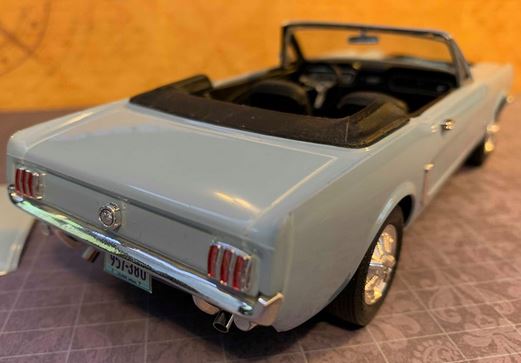 The 64-66 Mustangs have a pretty long and deep lineage through the model car realm and the numbers of iterations are ridiculous. There are these five ’64s by Revell, there are 4-5 AMTs, and then there are almost a dozen Revell/AMT kits for 65-66. Yeah… lots to choose from. I like the Revell kits (no surprise if you’ve read my shtick before) better than the AMTs, otherwise I’d have a hardtop. My neighbor, a teacher in my school, had a ’65 coupe that was white with blue interior. To this day, one of my favorite looking cars of all time.

The above cars are standard Revell fare (save for the deluxe kit that had “nothing else to buy”… yeah right – 1 oversized brush and 3 paints will make a poorly painted, plain-Jane car alright!) and will serve as well as the one I made. The deluxe kit IS one of the more rare kits, so a better investment, but for building, they’re all good.

CAR BACKGROUND :: What you are looking at are the production numbers for the first 2½ Mustang years. Over 1,000,000 Mustangs sold to the public. It was one of the greatest displays of affection for a vehicle in our country’s history. To put that into perspective, the Corvette, the most famous American model we have, took almost FORTY YEARS to reach one million sold. Why was the Mustang such a seller? Well, for a short time, there was ZERO competition. Chevy was LATE to the party (Camaro bowed in ’67) and Dodge didn’t have an answer at all. Nowadays, Camaro, Mustang, and Challenger go at it ferociously from year to year (ZL1 vs. GT350 vs. SRT392 etc, etc) with horsepowers getting nearer to the 1000hp mark every day. Back in ’64/5, however, your choices were a lot less timid. The typical engine was a 200/225hp, 289 V8. Not bad as a boy-hood racer and it would have sounded impressive with just some exhaust mods. The baddest racer sported a 271hp 289 hi-pro, and would get through the ¼mile in about 15.5 seconds. Early Mustangs were never good sprinters from the showroom and it wouldn’t be until the 428CJ was introduced that 100mph would be seen in the quarter.. some 4 years later. That said, Mustangs were cheap, reliable, and above all, beautiful.

I saw an article a ways back about the owner of the first Mustang sold… a Skylight Blue ’64½ Mustang (owned by Tom & Gail Wise) and thought it a beautiful story. I wanted to use that color for mine as a tribute. This is a craft Blue Bonnet paint and it is a hair “grey-er” than I had hoped, but I think it is still pretty. I had done this one in a Poppy Red motif and really liked it, but the paint wasn’t good in some places, so I re-did it in the blue. One day, I’ll probably go back and include a white interior. Someday.

The earliest mustangs had a glamorous, chrome-laid, elegant, interior, and I can honestly say that my boring black with a smidgen too much dust (been displayed for a while now), doesn’t do it enough justice. This kit has a great interior with a chrome cluster, detailed shifter, deep-ridged seats and a tight fit around the body. Can’t give me one, but I can give the model an A+ for the interior.

Love the little 289 in these Mustang kits. They REALLY stand out. I chose the stock air cleaner look (prob 200/225hp) and grey wires. There is a lot of extra deail in here, though. Master cylinder, washer bag, full-size battery, engine brace, and a decent radiator all make for a good looking setup. Like a lot of Revells, the firewall is just too bare, but the engine wins enough points to carry the rest.

This is one of the Mustangs that doesn’t have the annoying wrap-around exhaust near the rear axle and I LOVE it. The rims are pretty and the tires are decent too. I added better exhaust tips as the ones at the ends of these were lousy. I know it is a theme with me, but most models have it as an afterthought and I think it adds to the display.

These Mustangs are truly a monument to American automobiles, and though a dime-a-dozen at this point, provide a lump in the throat for enthusiasts everywhere. This Revell kit is actually a gem of a car. I am still not a fan of the convertibles as much as the coupes, but I always enjoy building this kit. There are no pieces that will ruin the kit (stuff to glue to glass, ill fitting stuff, etc) and it has everything you need straight from the box. It is also a good deal right now as there are many out there. Besides the “rare” deluxe kit, they should only run about $25 total and that is as good a deal as the original car!