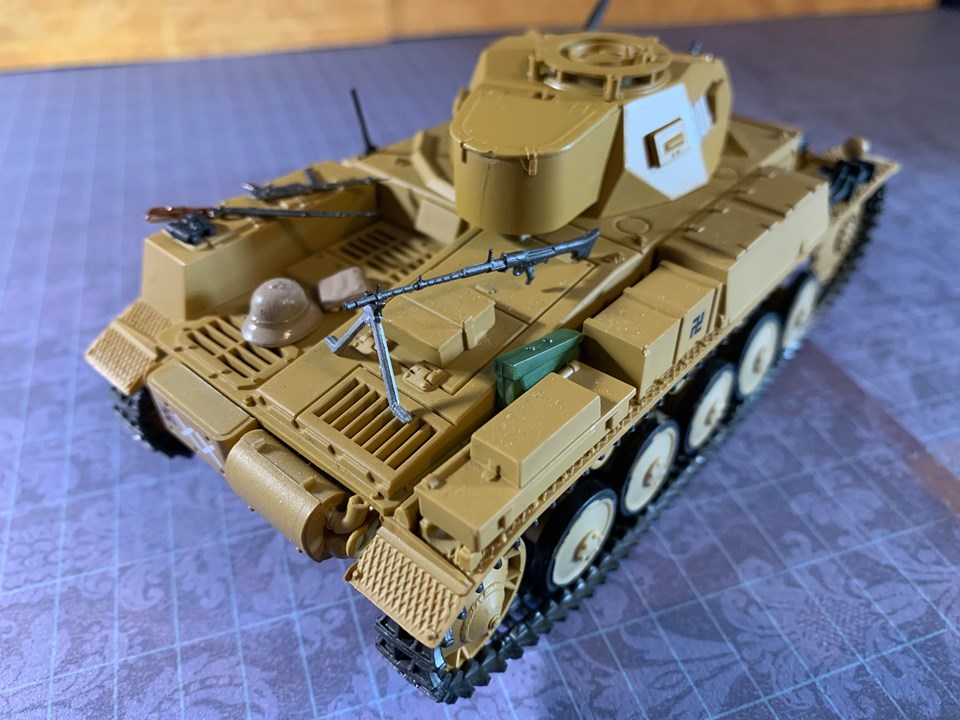 For my next tank review I made the Panzer II. Tamiya seems to make very nice and easily built models, but don’t be fooled by the term “easy”. There are a slew of parts and some odd fitting, but the treads are nice, solid rubber, the guns are movable, and the overall look is really nice when done. Again, I do not use “people” in my builds, so they were omitted, but this kit does have a few of them with tons of options.

This tank had many design flaws early. The Ausf A, B,and C all had significant armor deficiencies and that lead to further redesign. The Ausf F was a much better iteration, but were still a placeholder so bigger, better tanks could be produced (Panzer III, IV). The Ausf F tank would likely have been used in recon missions, but this particular color scheme would have been used in Germany’s Libya campaign.

So, for paint, I used Model Master Afrika Mustard and it looks about right. This kit’s larger movable turret in the front is really bold looking. The fitting for the big gun is good too – allowing a pose or easy maneuvering. The top can be fussy to assemble to the body, but there isn’t a lot on top to worry about breaking as you press. I included a lot of the gear to the body to add some flair, but it also gives an idea of all the accessories that go with this. For decals I had to use some numbers off a different kit as the ones for this tank were ruined. I’m not sure about the correctness, but it looks nice. I also printed a couple of Nazi symbols that were not included. I understand the hate for them, but I wanted the authenticity.

The only thing I had a problem with was the top fitting (mentioned earlier). I recommend checking it before painting and final assembly. You can sand, or trim whatever you need to make it a smoother assembly. Not a big deal, but something I would have liked to know before-hand (and something veterans to tank-building might already know).

I can say this is another good tank kit. The parts are plenty, there are a ton of people and accessories, and a couple good decal choices. Overall a good buy as well, this can be bought for less than $25. Schnell!