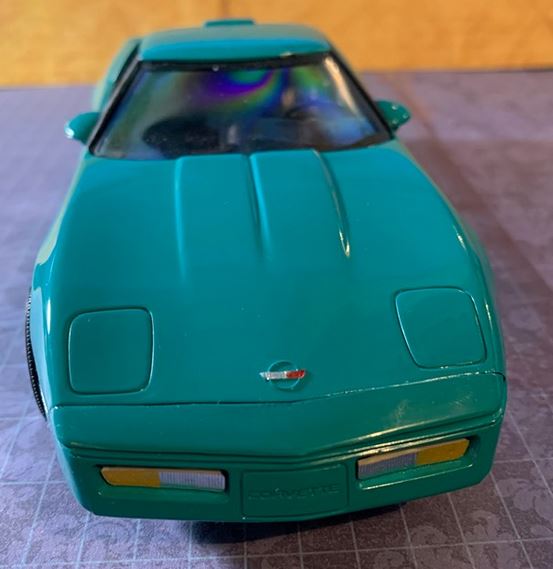 **CORVETTE EXTRAVAGANZA** cont. –> The C4 IS my least favorite of the newer Corvettes, and yet, I’ve built a few, read numerous articles on them, and almost bought one in 1999. Thing with this car is that model is cheap… I mean beyond dirt cheap. Between the numbers produced and the realization of the car’s mediocrity versus today’s Vettes, there isn’t a lot of desire out there to build em… which works for me. Scoring these kits (and other 90’s Vettes) is a true modeling “win” when you pay $9 a kit.

Most of these kits are of the same 1989-1995 Corvette ZR1 and with the exception of the front ends of the ’89s (the one in this review and the yellow one), they are all about the same builds. Really, the 35 or so horsepower difference will be of no matter from the earliest to latest, so take your pick.

CAR BACKGROUND :: In the late 70’s and through most of the 80’s, the Corvette was – at times – lethargic and pathetic (though damn good looking), and at times, adequate. Nothing special though. In 1990, the Vette returned to “very good” with its new engine. The stock LT-1 netted you 300hp and a top speed of 170mph. Not bad, but, not too far from the speeds of the Camaro/Trans Am of that year. However, in 1989, Chevrolet came out with the baddest Corvette since it’s inception in 1953 – the ZR-1. Named after a 70’s Vette with a strong 350 and excellent suspension mods, the 1989 ZR-1 toted a 5.7 Liter, DOHC V8 with a tire-shredding 375hp. That meant low 13 second quarter times at over 110mph. More than that, however, was an almost 180mph top speed. All of this for about $65,000. They called it the King of the Hill, and it was!.. until the new Viper hit the showrooms. Still, THIS was the Corvette that took the Corvette from just mere sports car to a true exotic.

Tamiya Cobalt blue. Looks a LOT like the Bright Aqua that came on the C4 Vettes. I’m actually not sure there was an aqua colored ZR-1 or if it were even an option, but this is the color LT-1 I test drove in the late 90s and I loved it! The hood looks a bit off in the front and that is because of AMT’s ignorant design. The nose has a small piece that goes across the front and is supposed to line up correctly with the hood. With work you get it close, but only the luckiest get this 100% right because it is just THAT poorly made. From various angles it looks spot on, but it is EASILY the worst aspect of this kit. However, the BIGGER problem with the ZR-1 is that, for the most part, the interior and exterior look almost identical to a 300hp LT-1. Mind you, when the car hot-footed past you, you’d realize the mistake you’d made, but otherwise, there wasn’t much glamour with the extra punch.

The interior is not half bad, but it is terribly difficult to bring out the 80’s bling. The orange dials, numbers, buttons, and needless lights were hit as best as possible, but it never really looks like the “2001 Space Odyssey” that IS the Corvette dash. It was a fun bit of nostalgia painting the interior of the car I had driven all those years back.

Now the engine is a whole other subject altogether. The LT-1 is rather simplistic looking and very a-kin to a Trans-Am. This aluminum bada$$ has the extra bling that tells you there is a brick in the proverbial boxing glove. The engine bay is a bit of a pain because of all the blackout treatment you have to do (that long front end is ALL flat black), but it comes out looking very menacing.

The big takeaway here is that this kit – though flawed – is so stupid cheap, that you could almost do three before getting to some normal kit pricing. The chassis floats too much under the car; there is a lot of glass trim to do; the tires seem a tad big for the wheel wells; and the exhaust tips are among the most useless in the model car industry. That is ok as heck, because you just spent a total of $12 on the kit… and it just doesn’t matter!