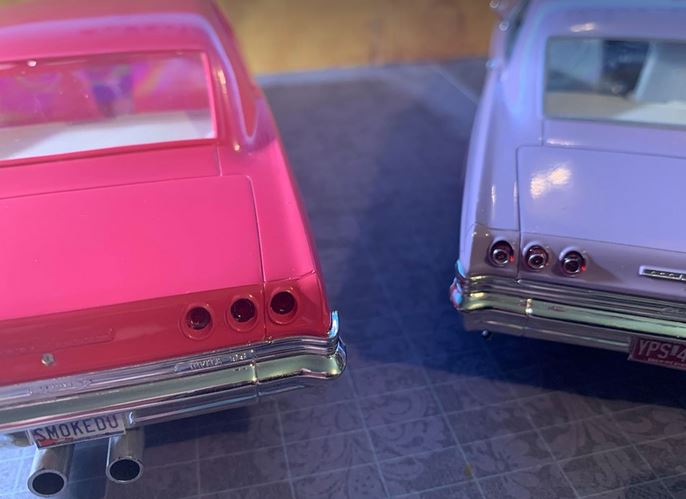 What the hell does the title mean?? Well, I like to keep things a bit variable on here, so this is a lot different than my typical blah blah review. I AM reviewing the kit to the left, but I’m also reviewing the FOOSE kit to the right. I have always liked this kit and aside from the front grill being a true bastard to get in place, it is one of the best kits made – IMHO. I say the review is different because I made two cars… one bone stock and with the Iris color that matches the box, and the other…. welllll…

Ok…. so the one in the bottom right… the red one… the one with the scantly clad girl. I CAN’T say enough about how much this ruins most of the respect I have for Hasegawa kits. I don’t even know where to start! The fact it is a 1965 and the cover says 1966? That they have the name on the side of the car, but couldn’t take the extra step to call it an “Impala” – rather “Coupe Type I” on the box? Do I dare mention the un-needed trollop on the hood of the car for no reason whatsoever? And why the heck do we only get the girl’s figure?? Where’s the rest of her?!!? Anyways.. the three above are really the only options for building and I cannot vouch for the AMT. You’ve seen in my reviews that Revell/Monogram will ALWAYS beat a MPC/AMT, but I honestly can say I have no idea on this one. I can say that the AMT is so costly, that I’d buy the Revell anyways. The FOOSE kit comes molded in white and has a few more custom parts than the stock kit I made, so it’s good too.

CAR BACKGROUND :: Not sure if EVERYTHING around you will be different (like the ad touts), but if you had a cheating wife, lousy job, and a kid flunking High School… you may have given it a try! Kidding aside, the ’65 Impala is a bit like my other ’65 fave – the Galaxie 500. Both are large, comfortable and come with good engines, but are more-or-less forgotten in the muscle/collector world. Which also means – to some degree – to the modeling world. It was only due to FOOSE getting their paws on the car this that the model was reissued. With that, I can say “fooey!”. This is a really splendid looking car with fancy lines, a handsome grille, abundant comfort, and a set of engines that can take the car from the sublime to crazed lunatic. The kit I made has the 375hp V8, and though it would only produce a high 15sec quarter, would still leave most of the bigger cars in its wake. But, look at it! It is stylish like a lot of mid-60’s cars dream of. Just great!

Ever since I saw the cover, I HAD to make this one in Iris. Alas… there is NO Iris paint available unless you go to GM themselves. I was NOT paying $40+ for the color, so I went shopping. What I found was that Krylon Gum Drop looked super close to Iris! $6 and some clear coat and voila! – instant Iris! This Revell kit is also fantastic with all that comes with it. There is literally nothing you need with building this one. Even the exhaust tips are usable… though I did change em out.

Now, for the Impala’s ugly, evil stepchild. The custom Impala I made is a mishmash of parts from everywhere. Outwardly in this pic, the door handles were deleted; the tires and rims are from FOOSE; and, obviously, the Hot Magenta color isn’t stock. Because this was set up for FOOSE, the suspension was an easy fix. Not like other fun stuff, though!

To the left, I went with the stock white w/black interior and had a ball doing the chrome. The Monogram kit has amazing detail and I had fun getting it done. On the other hand, the custom one was rather fun too. The steering wheel is from another kit (and is very race oriented); I added a Hurst gearshift; went full-chome on the dash; added a custom directional; and used a pink/white motif.

Now I know what you are going to say… Yes, the one on the right is a BIT more impressive. So much so, I use it for my header on this website. NO, it isn’t the greatest engine ever (it isn’t even wired), but I like how the chrome looks in front of the pink. It isn’t a 396 either. It is a blown 454 from a Chevelle. Not too much had to be done for placement either… SO worth it! The other engine is the 396 I mentioned earlier and it still looks stock-perfect. I could’ve chromed it up a bit more, but it looks like the typical “sleeper” in your dad’s car!

The chassis is also top notch. The stock pipes are really nice and fit well. And, like I already mentioned, the exhaust tips are fine, but I needed more chrome. Really good detail and easy engine placement make this a 100%, A+. That isn’t to say that there is no room for improvement. For the custom I scuttled the stock exhaust and went with a more formidable one. The muffler section is from a Mopar; the ends past the axle are off a Ford; and the tips are from a Murcielago! You can also see the tire difference from the stock 15″ers, to the 20+ inch FOOSE rubber.

Whether a 500+hp blown 454, or a purely stock cruiser, you’ve got a heck of a kit here. There is nothing to add (unless you go crazy custom like I did), and it wont cost a truck-load to buy because of the recent reissue. I wouldn’t wait for the price to skyrocket though.. actually, I wouldn’t wait at all!