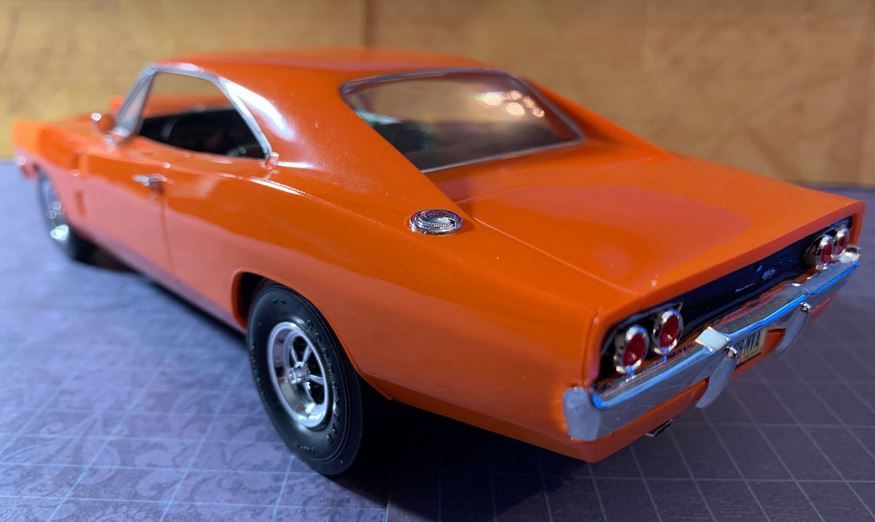 I had not built this one til recently and I can say that – besides the detail work in places – it is a fun kit to work with. There is low/no flash, tons of parts and speed parts, and assembles well. This was another kit I had trouble with getting JUST RIGHT in past attempts, but in the end, I just needed it to look sharp, and I wanted it to be a smidge custom. I got both…

Thankfully, to all that appreciate THIS Charger above the redneck cousin ’69, the kit I bought was just recently reissued. The two above include the older “Landy’s drag version and the more rare Euro version, but are both every bit as fantastic as mine was. The “Landy” version comes with decals for the build driven by the famous drag racer. The blue one is – I think – the same as the one I purchased. I have never bought or seen it in person, but given to Revell’s track record, it must be close.

CAR BACKGROUND :: Ok, so everyone AND the Pope knew this review was going here, but that is the legacy of this classic muscle. The movie Bullitt was a movie that increased the popularity and collect-ability of this beast more than any of its achievements ever could. The stories of this car being so powerful that McQueen’s 390ci Mustang had to be modified “heavily” just to keep up, is just pure muscle car adrenaline. The ’68 Charger was more than just the movie, however. The dramatic reshaping from the heavier and less muscular ’67 was something the country couldn’t ignore. The “coke-bottle” styling and dramatic move from the hatchback made this car look like it meant business. Not that the ’66-67 Chargers weren’t fast – as the Hemis of the muscle car era were pretty much the same speedy goodness, but the ’68 made them look the part as much as a Lamborghini does. The 426/440 versions of this car could rip the ¼mile in the mid-13s at over 105 miles per hour. These were STUPID fast cars and could easily rip the rear tires – even at speed! The most iconic muscle car chase in history is a good place to be for a car.. and it is deserved for this one!

Yup… orange was NOT a stock color in ’68. I don’t care! I LOVE an orange Charger and not just because of the good ole’ boys, but I think it is VERY mopar. I used Tamiya Orange and it is just stunningly glossy. I also went with the hood scoop and slick tires (that ARE a bit too big, LOL). This kit comes with everything you could want and I only add/changed things because of wanting to customize it some.

So, with my terrible picture skills, I didn’t post the interior of this one. Safe to say it is very detailed and is needing little. I believe I added a different shifter for the more “drag” look, but the rest was good enough for me.

You will NOT see this engine bay in too many places! I chose to FORGET the 426 Hemi and, instead went with a nice looking 383. Whaaat?? Yup. The motor fit nicely and looks the part. I get that the Hemi would look more apropos in this bay, but I was TIRED of making hemi-powered Mopars and the 383 was a really good engine in its own right. The ’68 made some 335hp and would surprise many of the bigger engines out there with it’s quickness. Again… nice change from the same old thing. The rest of the bay is typical Revell and needed nothing.

The 383 matched up well under the car and the turbo mufflers add to the menacing look. I really love the tips that come with this car too. The rectangle ends that these Dodge’s had were very good looking and add to the kit’s quality. No real fabrication was needed and there wasn’t a lot of frustration here. You have to be careful with the front valance when assembling as it hinders the radiator if you attach too early, but otherwise – it is killer!

Yeah, this isn’t the Bullitt Charger… it isn’t the Charger from the Blade movies either, though you could build either with ease. It is what I could see myself liking and potentially affording easily – what with 440s and Hemis commanding upwards of $60k. This kit is REALLY good though and not just because of the famous movies the car has starred in. It is one of the better kits out there and with the reissue, costs a lot less than many. Not the BEST investment with the re-issue, but there are a lot of legendary builds you can make with this kit… and that’s the point!