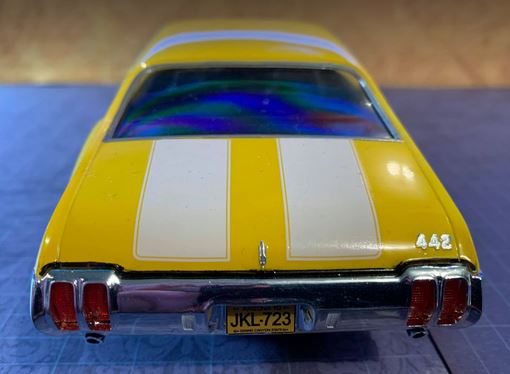 I have liked this car as well as the ’69 for most of my life. I know Olds cars get the short end of the stick when it comes to muscle cars, but these cars are fantastic. This model, unfortunately, is a terrible piece of work. The greatness of the car DOES win out… but barely. Usually I have a paragraph for other options with this car. There are NONE. This is the only ’70 model kit there is ANYWHERE.

Jo-han, Jo-han, Jo-han. I bark all the time at how shitty these kits typically are, and from the experience of working with almost a dozen kits recently, I can say they ARE inaccurate, overpriced, GARBAGE. This is a 1970 Olds Hardtop (442) kit. So…, tell me why.. there is a picture of a *1969* Olds on the side of the BOX?!? They mass produced a box with the wrong fricken car pictured on the side!! This isn’t a “feature” as they tout, it is a chuckleheaded ERROR. It does at least help me look in the mirror when I realize I made a stupid grammatical mistake in my writings, but this still makes for horrifyingly BAD confidence in the remainder of the kit when the box doesn’t even show the right damn car!!! Shame Jo-han.

CAR BACKGROUND :: So, like the ’69 442, the ’70 sported some potent engines while giving one of the better rides out there. The 400, however, was dropped and the 350 wasn’t as strong of a secondary engine. The 455ci still had the ominous 500lb-ft of torque – the highest in the industry – and would burn any set of tires to the ground with a simple toe-tap. The 442 name would then go steadily downhill til the end – with a wheezing, striped Cutlass in the 80s. This is definitely a car that should have had a reissue when you consider how many times a useless Gremlin has been!

Like EVERY SINGLE JO-HAN KIT I’VE BUILT, this Olds is full of problems and issues. I painted it Tamiya Chrome Yellow and added a LOT to make it work. First, the rims are from a ’69 as the ones included are lousy. The tires were also replaced. The stripes didn’t come with this kit and were used from a Revell ’72 Cutlass kit and they are on a hood with no ram air system. There is more… a bunch more.

Underneath, the car is 100% garbage. The detail is small; there are almost no parts to put together; the holes for the axles were off; the exhaust is molded and doesn’t line up with the engine (AT ALL) or the tips on the bumpers; and like I said earlier, the wheels and tires are trash. The only up-side is that the fit to the body is reasonable – though it does still float under the body.

Unlike the ’69 455, the ’70 is rather un-amazing looking. The blue is plain Jane, and there isn’t a whole lot of other decor to spruce it up. There are no decals; the brake boost is small; the wheel wells leave too big an opening between the bay and body; and there are NO speed options with this kit. Looking at this compared with the ’69 442’s 455 is like night and day. There is also no W-30 option or ram-air option either. In fact, this car plays out more like a Cutlass in multiple areas than that of a 442. Note** – the red wheel wells were a ’70 442 commonplace. Looks weird – especially with the yellow, but is a stock feature.

The inside of this car is a mash-up of good and bad as well. The shifter is unique as it goes up through the bottom of the interior tub – for a very snug fit. The dash also has reasonable detail and the steering wheel does too. Then you look further around and see the doors are VERY bare of detail, the seats don’t have a good gluing base, and the interior floats badly inside the body of the car. At least there are all the parts necessary to make the interior correctly, but it is a small consolation.

The biggest problem with this kit is that is is missing quite a few “442” parts. There’s no hood scoop for the hood (where this would also be a W-30), there are no decals for the engine and body of the car, and the engine bay has no hoses for the ram air system. This could be a ’70 Cutlass 350 easier than a 442. Beyond that, the kit still has shortcomings: the ’69 kits are better, and better equipped; and these kits are VERY pricey ($60+) since they are rare. They are a fantastic investment as this is an awesome car and not expected to be a reissue, but as a builder… you should potentially look elsewhere.