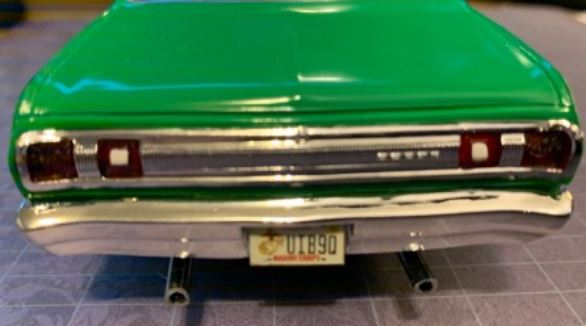 Well, here we are again. A MPC (pretty AMT) with much missing and some annoying qualities. It IS one of my favorite body styles which started with the 1970 Duster, and died with the less-than-spectacular Aspen. I had done this model before – the blue AMT one below – and had reasonable success, but I really wanted to do justice to this car.

I have only made the blue one of these and the red is getting more and more pricey. They should all be around the same quality and include the same parts. The two here, however, have the crazy tunnel-rammed hood that you cannot get with the kit I did (though I also think that they are either attachable or you get a stock hood – so no worries if you think it daft!). They are also somewhat of a sham themselves, however. They both taut the name Duster in bold lettering, but if you look at the grille, D O D G E is clearly stamped across the front. That aside, you can still make handsome Dart models of these both.

CAR BACKGROUND :: Like so many cars in the mid-seventies, the Dart was going through “slowing-pains” to say the least, and it was becoming more and more just a commuting vehicle than a road rocket. Your best bet for 1975 was to order the 360 Sport with 230hp. The ominous 440 was reduced to a lethargic 215hp and weighed more than the small block. The 360ci Dart would most likely run the quarter mile in the high 15s – barely hitting 90mph. The days of stoplight drags were becoming myth and fantasy.

So, I thought I’d start with the engine bay since this one is a bit of a Frankenstein’s monster. The 360, though a nice engine, is very commonplace. It is also vastly under-powered for 1975. Thus the installation of a ’69 440 4-barrel. This engine, not only was available for ’75, but fits rather well. The remainder of this MPC’s engine bay is rubbish without help. The radiator is poorly detailed, there is NO master cylinder/brake boost, the firewall is incomplete and has little on it, and the battery has no “ledge” to rest on. Overall, the additions and fixes I’ve done has made this very palatable.

I decided to do this car in a rallye green motif, and even though it wasn’t a true ’75 color, I thought it looked right. It is Tamiya Park Green and it is a fantastic paint. I then went with the flat black (fiberglass) hood, the stock hubs, and used the nice white-letter tires that were included. I also made “440” numbers to go with the stripes. I cut the “360” and added the “440” to match the engine. I added a hood scoop off another kit (as the one provided is a BIT over the top), and a side mirror off a late-60’s Mopar since the ones that come with it are awful (the same generic ones as at least THREE other kits). I think I like this one as much as any I’ve made, but it is still a mess of a model kit (more to follow).

The Dodge’s interior is about as good as you’ll find with MPC/AMT models, but I wanted to really spice this one up. I went with a beige interior with brown accents and it really shows up well. I added a directional stalk, but it otherwise has a lot of good detail/parts.

Even with the exhaust being fused to the under-carriage, this isn’t a bad looking area of the car. I had to use some exhaust pieces to link the 440 to the rest of the exhaust, but it was really easy to do and – with headers – would be potentially easier. The axle-back pipes are a bit on the thick side and where they are attached, look kind of silly. They would probably be 5″ pipes with the size of them and if I hadn’t paid as much for the kit as I did, I might have cut them off and added new exhaust, but I didn’t want to chance ruining the bottom of the car. I also chopped off the turn-down tips and added chrome tips. The stock ones are far too oversized.

Liking this car and loving the finished product does not save it from being a pathetic kit. The stripes are fraud, the engine bay is abysmal, the missing pieces make for scrounging, and the “street rod” pieces are laughable. If you have patience and some know-how, you can certainly make this car into something terrific, but otherwise it is a flop. As far as being an investor car, the model was just reissued. However, there weren’t many “runs” of this car so they should become more valuable over a short time. It used to be for sale at Hobby Lobby, but has since been taken off the shelves. You can still find it for around $25-$30, though, so it is not “expensive”. It IS, however, a much larger cost when you consider the edits needed to make it right!

UPDATE :: The exhaust was driving me nuts, so I cut it out. I didn’t realize it wasn’t part of the undercarriage, so it was an easy remove. I used the rear exhaust off of a ’69 440 Coronet kit and it looks a TON better! I very highly recommend replacing the axle-back pipes as soon as you start the kit. It really displays better and looks more realistic.